Urgent! Correction on date and time of Exhibition Booth at Conference in Accra

 BetumiBlog: Urgent! Correction on date and time of Exhibition Booth at Conference in Accra 


Urgent! Correction on date and time of Exhibition Booth at Conference in Accra


Hello all. I’m in Ghana and have now seen the actual program for the African Diaspora Homecoming Conference, and realize that I had some information wrong. BETUMI and Fran will be at the exhibition booth on WED, not Tues as I originally thought. You can find us at the TRADE EXHIBITION IN LABADI BEACH GARDEN MARQUEE FROM 8 a.m. until 19.30 on WEDNESDAY, MARCH 8, NOT TUESDAY.


Sorry about the mixup. We’ll be there with several of Osseo-Asare’s books (i.e., copies of The Ghana Cookbook, published by Hippocrene Books, Nov., 2015 @100 cedis or 20 US dollars, plus a complimentary snack bag), A New Land to Live in  (published by Intervarsity Press in 1977 and now out of print, but with a few copies available), A Good Soup Attracts Chairs: A First African Cookbook for American Kids  (published by Pelican Publishing in 1993, reprinted in paperback 2001; a very limited number of copies), and Food Culture in Sub-Saharan Africa (published by Greenwood Press in 2005 as part of the Food Culture around the World series) again, a few copies available).


Still hope to see some of you there. 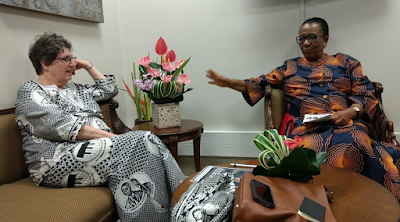 Hello & welcome to my blog! My name is Mocha Rose and I'm a 20-year-old independent blogger with a passion for sharing about fashion and lifestyle.

© Blaxis.fr - All right are Reserved